We have completed our NID experience in a very small and poor town and villages near Badaun which is East of Delhi.   We quickly realised that our role was more to do with publicity than actually doing immunisation.  They did let us do some immunisation and Angela did a great job.    Sally became our leader, naturally, which meant that she had to make lots of speeches and present prizes, which was slightly confusing as everything was being done in Hindi.
Here are our experiences.
Penny

Beware…………….I am going to be talking about this experience for the next 5 years – it has been amazing!
Angela

We had the most amazing four days seeing India in a VERY rural setting, but before being let out to deal with the masses we had an evening as dignitaries at an Indian Public School we all had to be on our best behaviour in our best frocks – except Andrew.   Going forward to the final day of the immunisation, when your President was nearly lost in a riot of her own making – say no more.
Sally

Polio Immunisation Day was truly an experience, I have never smiled so much nor had so many photographs taken of me in such a short space of time and we even appeared in the local newspapers!!
Nicky

We were treated like Royalty wherever we went, being cheered on by crowds of onlookers, garlanded on several occasions and having speeches made to us and by us.   We now know how hard the Royal Family have to work!  Once we had been feted, we then had to grapple with numerous small children to give them the polio drops, some of whom weren’t the least bit keen to have them.
Andrew

4th March 2013
UK Rtns Visit Report from India Mar 13  This is the official report produced by Rtn Shyamji Sharma who is the India National Polio Plus Committee Programme Co-ordinator.  Mr Sharma was our Rotary Host during our time at Badaun and clearly appreciated our presence there. 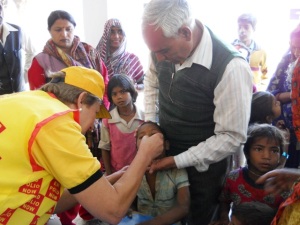 Passionate about Life!
View all posts by Penny →
This entry was posted in Brue Valley Rotary, International Support, Rotary Foundation. Bookmark the permalink.

1 Response to Greetings from India